The store chain Kvickly (Coop) is a major grocery chain in Denmark owned by a total of 1.3 million members and has a store in the Danish city of Ribe. Sveba Dahlen chose to visit Kvickly Ribe in particular because there they have chosen to bake with our energy efficient products and can also show, through their own measurements, that they save energy – a lot of energy!

The man very interested in the energy savings is Leif Andersen, who also welcomes the visitors to the bakery, which since 1 May 2014 has been equipped with two C150 and one Fermatic Q4 prover cabinet from Sveba Dahlen. Leif is eager to tell about how satisfied he is with the ovens and says that they were able to show energy savings directly – Leif immediately measured savings of 25 kWh/day – with the same working hours! And this was even though they began baking more (normal production is around 35-40 batches/day) as they were commissioned to bake for several branch stores. So despite this production increase, the energy consumption is lower than before – Leif estimates that average consumption is now 300 kWh compared with around 450 kWh/day before.

Leif Andersen also explains that there are more advantages with the functions on the ovens, which are equipped with SD-Touch panels. They have fantastic baking results since they bake very evenly – this is true of everything from rye bread to pastries. He also thinks that the steam system is excellent and, as the technical operating manager, really likes the fact that the ovens are impervious to lime deposits! The recipe management function in the panel is also smart, ensuring that the store's baking programs for all of the products are always the same. Leif is looking forward to updating to the new SD-Touch 9.0 panel and being able to use the new, updated functions. When asked if there is anything missing from the ovens, Leif thinks for a minute, but then answers:
“No, actually not. And I’m not going to switch ovens either. We do, however, have plans for the future and we’re talking about a bread line. But that’s further out in time as most of our machines are now new and work well.”

When asked how Kvickly Ribe decided that they would invest in Sveba Dahlen’s energy efficient ovens and not standard ovens, Leif explains that they joined their Danish distributor Frederik Christiansen on a customer visit and got information from a master baker there about how the oven works and its energy efficiency. Since they were already very happy with the collaboration with their distributor and knew of the Sveba Dahlen brand, with high quality products according to several master bakers, it was easy to choose. The ovens were purchased and the installation went well.
Leif says that the store was quickly able to begin baking at full capacity:
“Three men were here for the installation with flooring and everything... then we began baking! It feels safe baking with a Sveba Dahlen and with support from Frederik Christiansen, whose service installers are great! They always want to help out and come straight away if we need them. There’s never a shutdown here!” 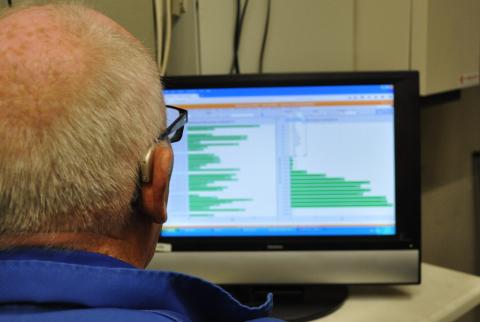